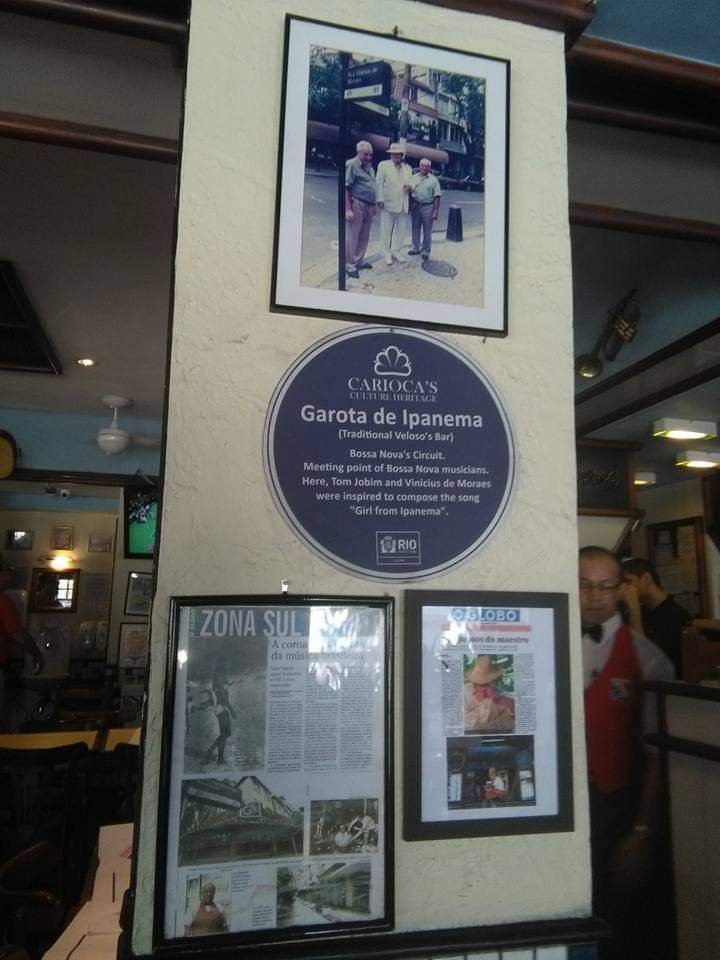 When I arrived in Rio de Janeiro at the Antonio Carlos Jobim Airport, I thought it would be good to visit a bar where almost 60 years ago the most famous bossa nova style song was written. And so it happened.

My colleague Alan is a first-class musician and interlocutor. He did not finish anything special musical, but the Faculty of Philosophy at University of York gave him a living mind and orientation in infinity. Instead nstead of studying music literacy in old York, he was taught a literate attitude to music. A few days passed when I first saw the Sugarloaf and the Christ the Redeemer and here I am on Ipanema on a hot summer day. At the mouth of Vinicius de Moraes Street, I waited for Alan for a few minutes and it gave me a look back. Beach soccer, running people. Tanned people and the ocean. The sandy beach is large and yellow for miles becoming a barrier to salt water.

"Hello," that's what I said Alan as he approached me under a palm tree. "How you feeling in the cultural capital of Brazil?"

"Hi mate," he answered. "Sure, I'm always comfortable where the music is played, and what the music! Lots of music around! You know, I open the door of my room and there is music in the corridor, I go down in the hall and there is already other music, going outside and there is already the third music and then music is heard from every window and every car! Here's what I like about Rio de Janeiro."

"Me too, it's impressive. By the way, I already know that we are walking down the street named after the composer who wrote The Girl from Ipanema." I testified, holding out my hand.

"Heh, I promised to show you that famous bar, and I chose this street, the street not by chance, because it was on it that Helo Pinheiro once walked, the same prototype girl. She really existed - a girl from Ipanema!"

My friend continued the conversation as we walked along the sidewalk protected by shade from deciduous trees. Banners lining the bus stops warned us about aggressive mosquitoes and we asked each other: "Where are they - mosquitoes?" Instead, at one of the intersections, we noticed a group of jugglers who jumped out on the street when a red traffic light was started and covered the hot air with colored layers. Every one of the local drivers has probably seen this show more than once but for us this was first time. Carnival is somewhere around, once you are in Rio. The echoes of it will always haunt you if you find yourself in this city. Green turned on and the cars drove off and we turned our eyes to the other side of the road. Bar 'Girl from Ipanema' stands at the crossroads continuing the architecture of two streets.

An old waiter in a red vest and white shirt was polite and seated us near the entrance where one of the square columns read: "Garota de Ipanema

Here, Tom Jobim and Vinicius de Moraes were inspired to compose the song

On another column supporting white ceilings covered with pipes and saxophones, hung a large white stand with a musical condition and  the notes seemed to be the autograph of Jobem himself. Pics with authors, musicians and a beautiful Brazilian girls were hung around the walls. It was crowded and between the din of lunch we listened to the bossa nova and samba accompanied by a large pizza and a large jug of coffee, Brazilian coffee.

"Great place, Alan, I'll talk about it when I have to play this jazz standard somewhere.- I was thankful." I thanked my friend for the company. "Yes, I love this song especially performed by Getz/Gilbert. No wonder they received a Grammy and opened the era of Bossa Nova. Somewhere in the early 60's, the authors of the musical masterpiece of song form sat as we do now, perhaps at the same table and with the same pizza, drinking black coffee. Who knows. But one thing is certain, music and lyrics sounded in their hearts every time when they saw a young beautiful girl who disappeared behind the crossroads in the street leading to Ipanema Beach."